Art for art's sake, or art for God's sake? 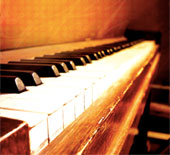 I suspect it's an old chestnut that Christians who want to use the arts for evangelism have struggled with through the ages: should my main focus beon the art, or should it be the evangelistic message? Can I somehow do both without compromising either?

Some Christians are on the "excellence" band wagon. Pretty much everyone agrees that the art needs to be good enough to engage people and draw them in. Doing a cheap and nasty job doesn't reflect well on our Saviour - or whatever message we might be trying to shoehorn into our shoddy creation. For me, the question is more a matter of how excellent is actually excellent enough.

Years ago, I spent several months with an extremely creative Christian artist. We were both working with a well known misson agency out of our home countries playing in different bands. He was an excellent musician, singer - and crazy wood sculpter! He had recently pulled out of being the lead singer of the prog-rock band he was in that sounded suspiciously like DreamTheater. The sticker for him was that he and his band mates had to spend so much time rehearsing their music, that they didn't seem to have much time for anything else. My friend wanted to spend a bit more time talking to people about Jesus and didn't reckon that he needed to be in JesusDreamTheater to do that. Some would say you can just let the music speak for itself, but my friend wasn't convinced and quit.

Another friend of mine (actually he toured with Taco a few years ago) operates at the top of his game as a sort of classical/jazz guitarist. From what I can work out, he rarely speaks openly Jesus in his concerts, but gets to play his amazing music - and share himself and his life of course - with people that your average missionary would have no chance to meet and talk, in countries that are extremely hostile to said "average missionary" and the Gospel. Some would say he wastes these opportunities to tell people about Jesus "If they don't hear the Gospel from you, who else will tell them?" Others might just chalk it up to salt and light and trust that the same God who speaks to Arabs and Afghans in dreams and visions might still have a plan.

Another friend of mine had gone half way round the world and was - relatively successfully - pursuing the dream of being a classical concert pianist. In the end, he turned away from that path. One of the (many) factors in his decision was that to actually cut it and succeed in that world, he had to practice almost ALL the time. Much as he loved music, he didn't think God was calling him to spend 40 hours a week by himself behind a piano when he could be doing so many other things. He is now a Baptist pastor back in his home country.

All of these guys were extremely gifted artists and were seeking to use their gifts for Christ - and yet made quite different decisions about the best way for them personally to do this. It reminds me that there is not necessarily one right answer - although I think there are a bunch of not so good ones (that maybe I'll get to in another post). Either way, it is an important question that each artist needs to answer for themselves. There are great artists/evangelists working at both ends of the spectrum achieving great (albeit different) results.

So, how do you decide how good is good enough? Partly it comes down to natural ability. Some folks are never actually going to be world class artists no matter how hard they try - and spending all that time trying may well be a waste. Sometimes it comes down to other giftings as well. Devoting all your time to your painting gift, say, at the expense of another gift God has given may not quite be what God had in mind when he gave you the other gift - unless you are creative enough to be able to combine them of course. Passion also plays a part. Some folks really are passionate, borderline obsessed with their art - and perhaps they need to be in order to be at the top of their field. Whether that kind of artistic obsession is healthy for a Christian (or anyone really) is another matter, but most of us have a mix of less focussed passions and it's probably best for us to work according to that mix.

Sometimes it comes down to context. I was in a touring band playing in primary schools once. I remember feeling cheesed off with myself for screwing up the guitar solo - yet again. I looked down, and there was a line of special needs kids strapped into their wheelchairs dribbling over themselves in the front row of the assembly hall. And yet, as I looked into their little faces, these kids couldn't care less about some stupid guitar solo. They were having a great time listening to the best band in the world that day. I'm not saying we need to play well enough so that only people with mental disabilities will enjoy our music (!) but on that day, I was more than a good enough player to bless those kids.

For me, I tend more towards the utilitarian side of art. Sure, I love being creative and to do things as well as I can - even if, like so many other insecure artists, sometimes it doesn't feel like they are all that good! And man, I love playing on a huge stage with a thumping sound system and great musicians as much as the next guy. But for my particular level of gifting and Jesus-passion, if I don't get to explain the meanings to the words of the songs I sing relatively often, then I'm a lot less motivated to sing them in the first place.That's probably why I am with Taco.

But you are different to me.