Muslim Extremism and the Parable of the Sun and the Wind 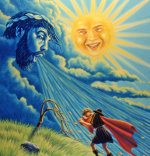 Due to the recent violence of IS in North Iraq, in the last few days, military action is being taken to try and prevent them from doing any more harm to the Yazidi and Christian minorities they have been attacking.

And while yes, something should definitely be done to protect these people starving to death on a mountain in the baking desert sun, if the only options we have to turn to are military ones, then we are WAY WAY too late.


It reminds me of Aesop's old fable about the sun and the wind...

The wind was arguing with the sun about who was the strongest. The wind looked down and saw a man wearing a coat. The wind challenged the sun to see who get the coat off of the back of the man. The wind, wanting to prove himself, went first and started to gently blow on the man. The man's coat started to flap a little in the breeze, and so he did up all the buttons. Unperturbed, the wind continued to blow, stronger and stronger. But no matter how hard the wind blew, the man only held onto his coat more tightly.

Finally the sun chuckled and said "Wind, my friend, let me have a turn." The wind stopped blowing, and the sun started to shine. As the weather slowly became warmer, the man unbuttoned his coat, and after a few more minutes happily removed his coat.

Bombing IS may help short-term to protect the suffering Iraqi Christians and Yazidis - and I sincerely hope it does. But in the long-term, such attacks only encourage radicals to hold more tightly to their guns and religion on the grounds that they are being attacked by the evil infidel.

If even a fraction of the money that has been spent on last minute emergency military solutions had instead been spent a lot earlier in getting to know Muslims and sharing Jesus' message of love with them I dare say we'd be in a different place. Reaching out cross-culturally to Muslims (at home or abroad) is HARD work. Having been doing it for ten years with TACO, I know how hard it is. By the way, I don't think it is the state's job to pay missionaries to do this. I am also aware that poverty and oppression are root causes of extremism - addressing these are also a major part of Jesus' message. And I am also not so naive as to think that this simple strategy will eradicate all extremism. It certainly won't help the people dying on Mt Sinjar tonight - although hopefully the aid drops will. But for those parts of the world where there are Muslims living side by side with non-Muslims and things have not come yet to blows, perhaps "loving your neighbour"  is a strategy all of us can apply - and it might even save lives. Maybe even yours - depending on where you live...

Think of it this way: Every person who loses a family member to violence and swears revenge, is one more person who can be radicalised or at the least, be supportive of the radicals.

Every person who comes to faith in Christ and starts following the law of love, is one less person who will support a hard-line terrorist.

Do you want to be the sun or the wind?