The band played in Antalya, Yalvaç (Pisidian Antioch), Isparta, Bursa, Ankara and Izmit. The Antalya, Yalvaç & Isparta concerts were in conjunction with the St. Paul’s March. In Pisidian Antioch there were over a hundred Muslim Turks dancing to “We Want To See Jesus Lifted High!” It was also the first time we played on a university campus; at the university in Bursa, there were around 700 students in attendance.

Fletch Wiley has produced jingles, theatrical releases, and movie soundtracks in Houston, Dallas, Los Angeles, Nashville, Seattle, San Francisco, London, and Oslo. he is a Jazz Trumpet/Flute/Fluegelhorn musician, as well as a worship leader. Check out the Fletch Wiley website.

Fletch Wiley toured in Istanbul and Bursa. There was a positive response at the Gedikpasa church in Istanbul with a few professions of faith. We also had a great concert at Uludag University in Bursa with excellent interaction with the students. Check out a video from the tour 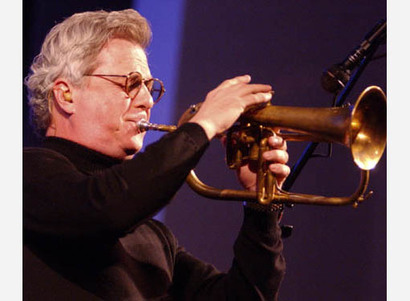 Big Day Out came to Turkey in 1999 from Minnesota, USA.

We toured Istanbul, Ankara, Izmit, Izmir, Marmaris and Antakya. It was a great door opener in Samandag (Antakya area) with a turnout of 5000 people in a town of 45,000. This type of event had never happened here before. Also, this is the first time we had had someone perform in Marmaris.

An American pastor living in Italy playing a lyrical blend of acoustic rock. Not content to woo audiences with his great voice, Scott would sometimes resort to balloon tricks to capture the attention of his crowd.

Scott performed in Çanakkale, Antakya, Antalya, Marmaris and Ankara. Unfortunately, we had a major accident with our minibus. Despite that, we were encouraged by the positive response to our first-ever tour in Canakkale. We had a great mini-concert in tea garden where the gospel was shared openly, as well as a turnout of 1500 in Selucia... another great breakthrough! A number of professions of faith were made with one in Ankara praying to receive Christ. "I would like more info through you booklets and also to meet and talk with someone more about Jesus Christ." (Concert attendee.) 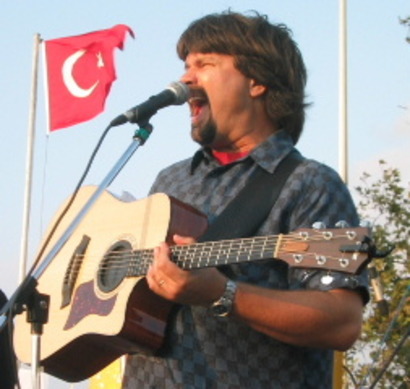 A super-likeable Canadian rock-band offer high energy rock originals and oddball takes of a few covers. [Broke up in 2002]

Echelon played in Antakya, Marmaris and Istanbul. We had great concerts in Antakya with good interest at the acoustic concert. Some serious seekers responded. Also a real encouragement to the local believers was the open follow-up concert we did after several large concerts. Approximately 1 billion lira was raised for earthquake relief. Some serious seekers responded. One girl prayed to receive Christ after a concert in Marmaris. 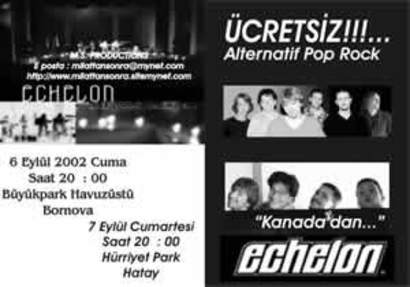 Los Vecinos is a group from France, Spain and the USA.

Los Vecinos ministered in Istanbul, Bursa, Ankara, Antakya and Adana. This tour put the Bursa church “on the map” for serious seekers. 500 million was raised for earthquake relief thre. We got super responses in Antakya as well. 92 surveys were received- 89 asked for literature and BCC details and 69 asked to meet with someone to talk more of Christ. 78 surveys were received in Adana; 71 signed up for BCC and many requested personal visits. A number of professions of faith were also made in the aftermath of the Istanbul concerts.