Norm & Youssef did a series of shows. One of the largest shows, which took place in Cairo, saw hundreds of Sudanese refugees (and a few locals) in the audience - 90% of whom were of the Muslim faith. They were entertained by two great showmen and also heard the gospel preached - many folk responded and were prayed for afterwards.

A group made up of unicyclists, musicians, dancers, and actors, bringing the message of the Gospel

The team of 12 called this the DDUM Tour since the show consisted of Drama, Dance, Unicycling and Music. The highlight of the tour was in the city of Tunceli. The team had planned on doing spontaneous shows but after police videoed themselves telling them they could not perform without permission they were amazingly granted permission. Two nights in a row the team performed for over 800 people who were very open and interested in the presentation! 2-3 guys made commitments and they are hoping to plant the first church in the city from these and other new contacts. Check out a video from the tour 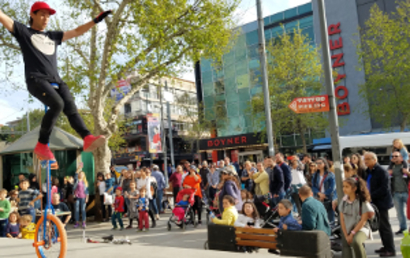 Team Aloha had the privilege of sharing the gospel across Albania and also did our show on TV 7. While performinging in front of a Mosque in Shkoder, several people indicated they wanted to know more about following Jesus! One of them was a 21-year-old who said, "I was a Muslim but when I heard the Christian message I wanted to follow Jesus." We performed in Ballsh which is 95% Muslim and did not have a church. There is now a plan to start a new church plant from the contacts from our event. In summary, we performed for 3,150 people during 11 events and 2 new church plants. Check out a video from the tour 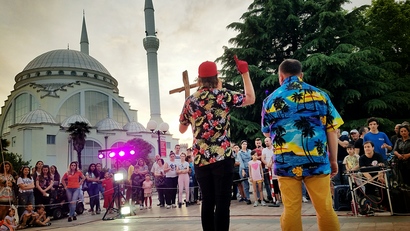 Our team of 16 from Colombia, Germany, Turkey, America, Ukraine, Canada and Brazil stormed the streets of Germany with our MADGiCycle Express (Magic, Music, Art, Dance and Unicycling in Germany) show to creatively share the Gospel. We partnered with churches and ministries across Germany these five weeks for outreaches, focusing on Muslim refugees. In Berlin, God showed up and specifically met three people who were visibly impacted by the Gospel message and surrendered their lives to Jesus on the spot. Over the five weeks in Germany, we did 39 events for 4,230 people in 17 cities.

"No Longer Music" (NLM) was founded in Amsterdam in 1985 by David Pierce and has been touring the world ever since. Since its formation, NLM has made its mark through its bold and creative blend of music and theater. In many ways NLM has been and continues to be a refreshing exception to a music scene rarely daring to be different. Throughout the years the style of NLM has adapted but its commitment to cutting edge visuals and theatrics has ensured that international demand for the band has stayed strong. Check out the No Longer Music website.

No Longer Music started the tour in Albania with a TV interview on national television. There were a total of 21 shows, with more than 15,000 people in attendance and over 1000 surveys of interested people in Jesus to follow-up. The tour helped support the outreach efforts of small local churches and to also support the planting of two new churches following up on the Teah Aloha tour. It's great to see one team do the initial sowing of a new church plant and another team adding to the work. 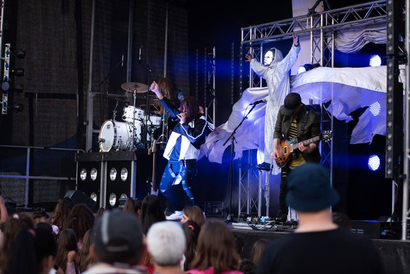 Every two years, local believers from Turkey gather together to be encouraged and trained as worship leaders and creative artists. There is Bible teaching and seminars, workshops, and technical lessons for music, drama and dance over four days where participants develop their skills and draw closer to God.

Every two years over a hundred people anxiously await for Taco’s “Kanat Camp.” This summer was our 6th event and we continue to be amazed at what God has done. Over 100 participants came from 18 different cities and nearly 30 different churches. The people are divided into 9 separate worship teams, each of which had a chance to lead a 30-minute worship session one morning or evening. From the first Kanat when each teacher was a Taco team member, this year 70% of the teachers were Turkish believers. Our celebration evening, which ‘showcases’ what they’ve learned, was a rich and surprising time. 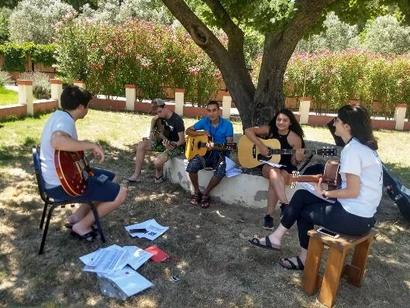 A mixture of artists, ministering together and sharing the Body of Christ with the world.

A team from 5 continents came to Egypt to share the love of Jesus. The 1st week was to train youth at a Christian artists conference to develop their gifts and talents for the Lord. The last 2 weeks they toured in many of the major cities along the Nile. The team did 11 performances for a total of about 2150 people. About 90 people came forward for prayer, many to learn more about following Jesus, and others to pray for deep needs. 640 surveys were collected from people who wanted to know more about Jesus, and about 120 from believers who wanted to be discipled in sharing their faith. 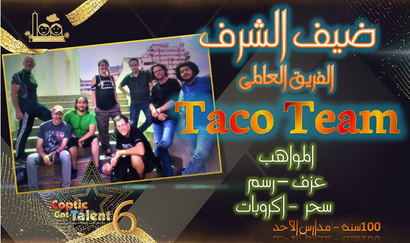 Featuring a mix of different art forms (music, drama, dance and usually a few other things) this group entertains audiences with their gifts and shares the life-changing message of Jesus with them - both on and off the stage. Check out the TACO Performance Group website.